Real Model is a aftermarket company that produces lots of resin aftermarket accessories like engines, conversion sets and complete resin kits! In this review we’ll look into the engine set they produced for the M1070 Heavy Equipment Transporter by HobbyBoss. The engine is completely made out of resin with exception of the Photo Etched fan.

The parts come in an sturdy cardboard box with a nice boxart of the installed engine and some reference pictures.

When you open the box you’ll find carefully packed parts with foam protection around it, you’ll get:

The set does not only include the engine, as you can note on the picture, there is a new bottom plate and front part of the M1070 cab included. This is because the original HobbyBoss pieces will not fit with the resin engine by Real Model (HobbyBoss’s mistake). Real model included a one piece air intake as well with extra detail such as hose connections etc.

I started with the build of the engine and had to carefully remove the large engine block from the casting blocks, the removal went quite easy, some sanding and filling required but that was fine by me! The engine block is beautifully casted with nice detail on wiring, hoses and other small details.

Off course the engine could not be casted in one single piece so at this point you’ll need to attach separate pieces to the engine to complete the engine. The instructions are made out of self made pictures and are ok but not great. I had to struggle some times to check where parts needed to be placed. After contacting Real Model, the owner Miloslav was glad to help me out and showed me were to place the last parts, so great service.

After the resin parts and PE ‘Diesel’ and ‘Detroit’ marking plates were applied you need to scratch some hoses and wires around the engine as shown in the instructions. Again, the instructions are not to great at it but with some fantasy and carefully checking you’ll figure it out easily

The air intake that goes right behind the front of the engine hood is carefully casted out of one piece and has greater detail then HobbyBoss’s one would have. There are connections for the hoses that go to the engine and the bolts are beautifully casted. Only minor cleaning was needed here.

The correct sized front and bottom plate of the cab are a must for the engine installation. Installing the engine with the HobbyBoss pieces instead would not work because the space under the cab (gap in the front plate) would be to small. So great addition to this set!

Installation of the engine

After building the engine there’s still work left to do! You have to actually install it on you M1070 frame / chassis! The fun part about this is adding the hoses that go from the engine to the air intake and the rest of the M1070, it looks really cool and real life. Bad thing about this is that Real Model provides only one picture of this in the instructions, and it’s not the best one. After contacting Real Model I got some extra references and with some thinking and fantasy I was able to place the hoses quite easy! Good thing is you guys have great reference pictures from my pictures.

Overall this set is very welcome and adds a great feature to you impressive M1070 truck! The engine installed with the hoses etc. looks amazing if you ask me! To bad you wont see half of it when the cab is installed but that’s just the way it is.

Apart from the not always clear instructions and only some air bubbles that needed to be filled this set is very recommended for the price it goes for!

Resin parts for Engine, Air intake and Bottom and front plate of the M1070 cab

instructions may not be very clear to you 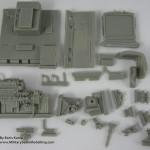 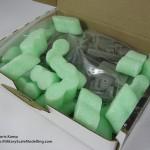 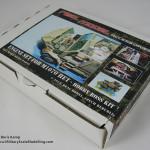 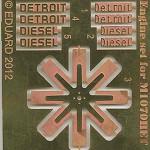 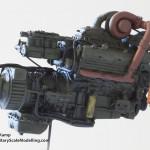 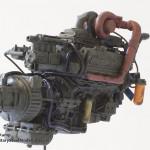 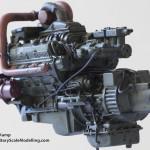 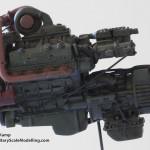 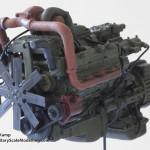 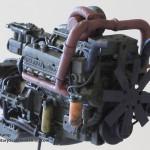 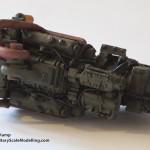 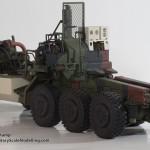 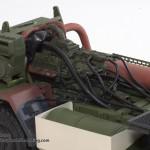 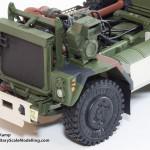 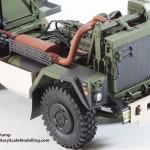 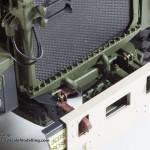